You can find source codes on this link.

In Numerical Algorithms, every matrix represents a real-world problem, because matrices are the most efficient tool for converting from physical problems to computer language. 3D   Heat Map is an example of them. 3D Heat Map can be used to simulate heat flowing to obtain potentially dangerous situations and improvements on a material. Without a doubt, a 3D Heat Map be beneficial to solve a lot of different problems. In addition to that, Matrix Equation cannot be answered without a Matrix equation solver method.  For my project, my solver method is Conjugate Gradient. The reason which is behind the selected Conjugate Gradient method is that Conjugate Gradient be used in different fields, like AI.

Apart from these, I used the Finite Difference Method to obtain the A matrix. So, I can explain the algorithm I use.

Algorithm of the Project

First of all, imagine a cube, this cube is heating each surface certain value. and you as a researcher want to find out the final heat distribution.  You want to know the temperature values of the cube at equilibrium. Hence you need a Heat Map Equation which is “Ax=B”.  To create A matrix, you need to know the finite difference method. A is stored finite-difference relationships to heat points information. For 3D Finite Difference, the Heat Equation is

So, A matrix is a symmetric sparse seven-band matrix.

Of course, we do parallel processing so I have to divide all matrices and vectors into processes like the above.

I use MPI Cartesesan Shift to find the neighbors of each processor. Thus, I get the information of LEFT, RIGHT, FRONT, BACK, BOTTOM, and TOP processors.

Thus, I receive and send data with these special data types according to the relevant surface.

You can see the data in the local of each processor in the figure below.

Therefore, I created all fundamental matrices and vectors to start solving the Heat Equation. 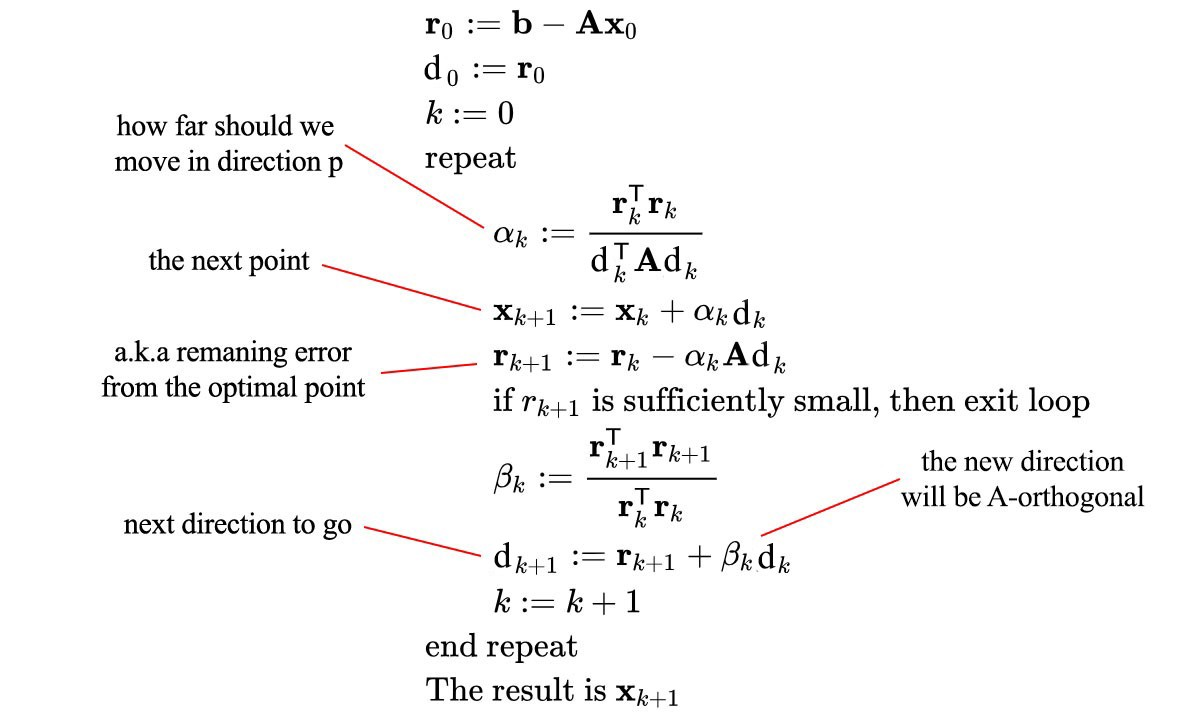 The main idea behind the Conjugate Gradient method is to find the global minimum, that is, the solution point, by following the slopes in the equation space. Therefore, the X vector is given a random value and the algorithm is stopped when the error value falls below a certain tolerance value by updating it iteratively with Alpha (Distance amount), and Beta (Direction) values.

In the figure below, the blue dot represents the random starting point. Then, by applying the gradient descent algorithm, it is shown how the two steps converge to the X point. 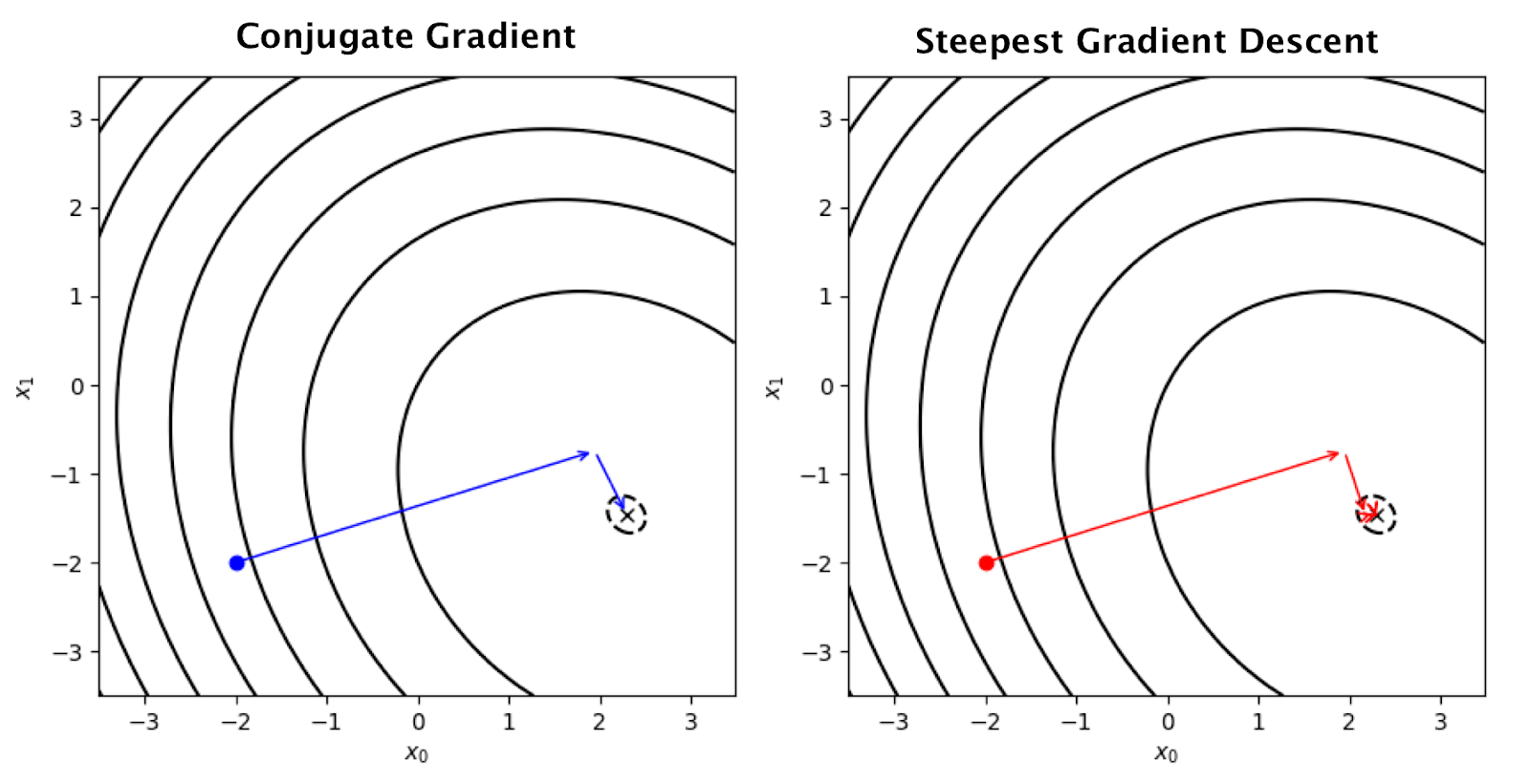 Alpha and Beta are two very important values. And to get them, I need to add the local Alpha and Beta values obtained on all processors. So, I used the MPI_AllReduce algorithm. Because of this, all my processors need to be synchronized in certain places, which of course creates a communication overhead.

We’ve come to the main part. Here we have a do-while loop that will continue until our error is below 10^-7. 10^-7 I chose it. This may change according to the desired tolerance value. The local_direction vector is the most important thing in the Conjugate gradient method. because we update the local x vector according to this direction method and take one more step towards a more accurate result. Therefore, at the beginning of each iteration, we update the ghost points with neighboring processors and calculate the next local dir. To calculate the alpha value, which is another important parameter, I had to sum the local residual squares and add them with MPI_Allreduce and values ​​from all other processors. After obtaining the alpha value, I updated the local x and local residual vectors. then I first do the sum of the square of the local_residu and the vector in the local to get the Beta value. Then I get the beta value by adding the beta values ​​in all other processors with the MPI_ALLreduce function. So I update the direction vector. then again using MPI_ALLreduce I get the residual norm value. and I’m rooting it and comparing the tolerance value. I decide whether to continue or not depending on the situation. 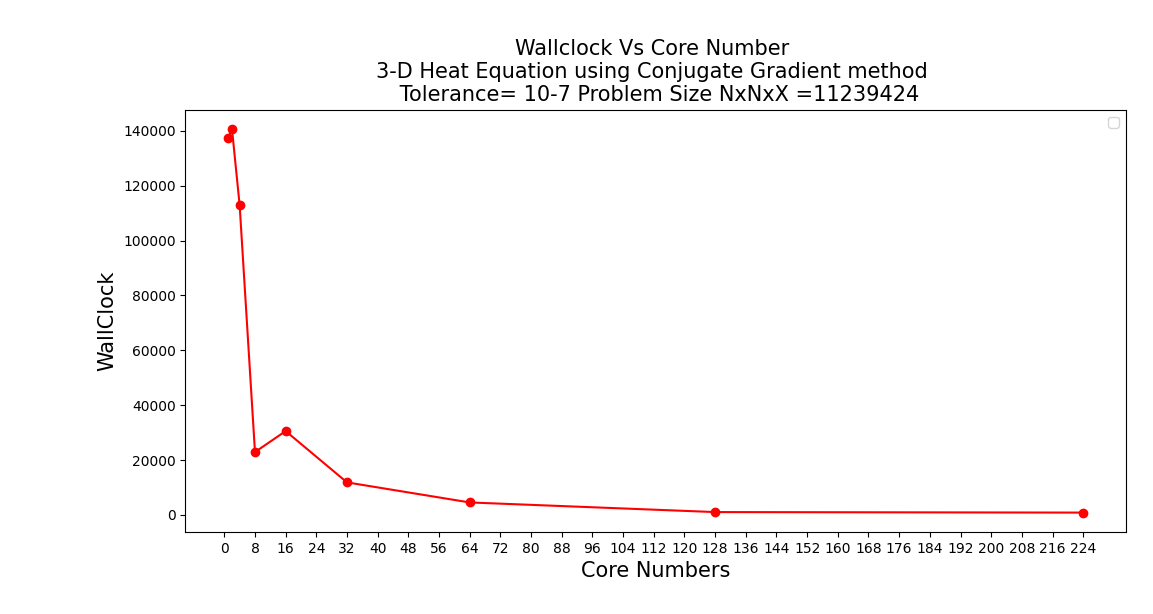 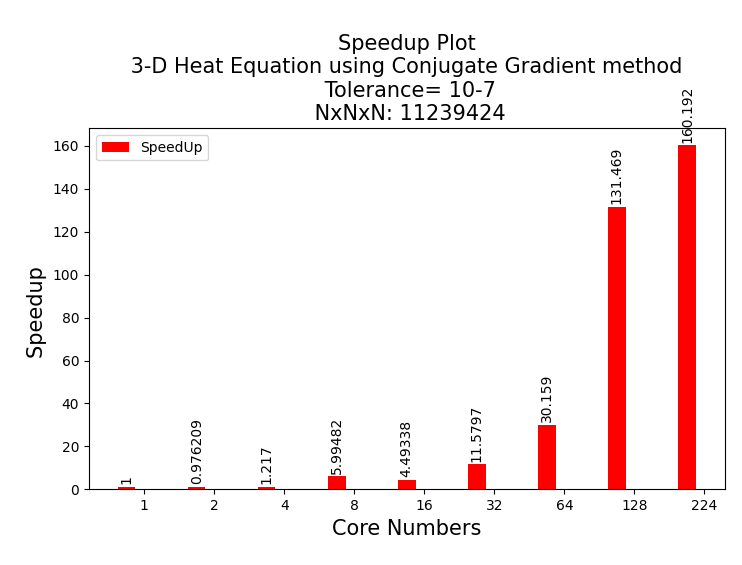 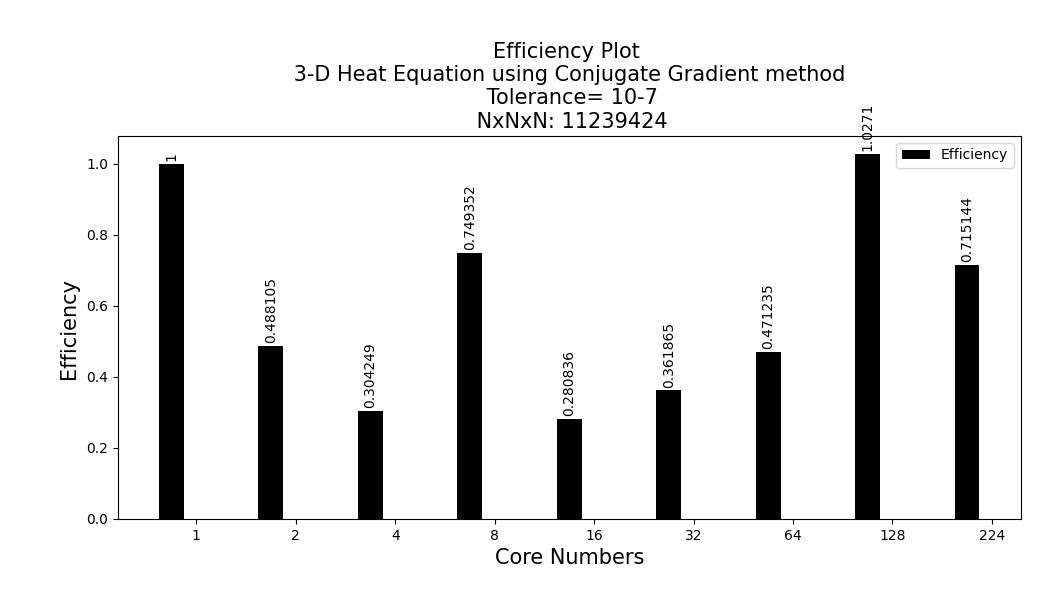 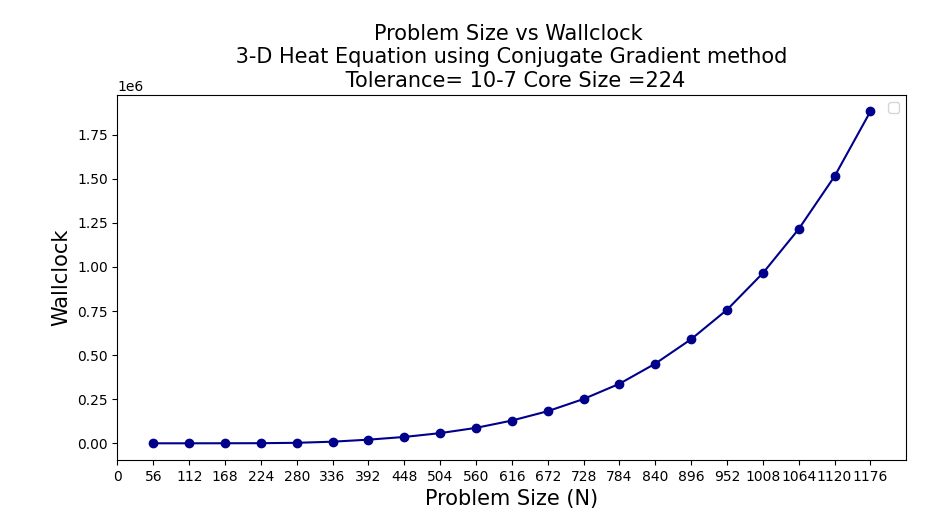 According to the results I obtained above, I am not getting good enough results compared to the normal single processor, where I use a small number of processors. I think this is because of the communication overload. An almost exponential increase is observed as the number of cores increases. The model with 128 cores gives the best result in the efficiency plot. I attribute this to the fact that it is 128 2^7. Thus, I think the Communication overload will be lower (Bufferfly communication). I would test this if the server system allowed me to use 256 cores. Other than that, the Problem size vs Wall Clock figure gives exactly the N^3 graph, which is the result we expected.

First of all, if I need to talk about the potential limits, of course, hardware limitations can limit the working speed. Because data transfer between processors is a limiting factor. Apart from that, the frequency and cache size of the processors directly affect it. In terms of software, I tried to make MPI communication blocks async as much as I could. But I couldn’t make AllReduce and MPI_Receive side async. Apart from these, some MPI_Vector data types instead of MPI_Continguous data types could have enabled me to transfer my data more effectively. In general, I can say that these are the main factors limiting my limits.

How to Improve My Result

Design an algorithm that decreases communication to other cores,

Try to bigger matrix size than 224

I learned a lot from this project. I learned how to create both Heat Map problems and how to solve this problem with the Conjugate Gradient method. Apart from that, I learned how to set up parallel processing and MPI, which is the main topic of the course. I learned how to apply it, even if I didn’t fully implement it in the best way. I am very happy to work on such a project.